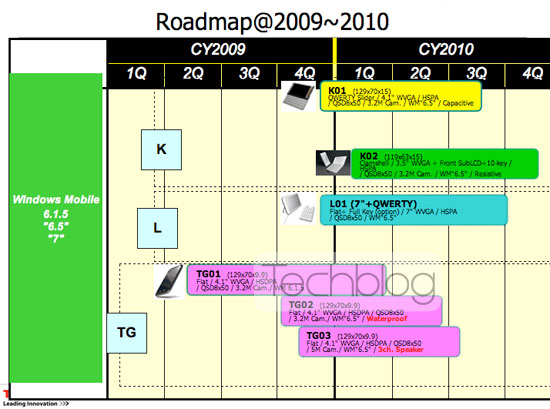 Toshiba’s monstrously awesome TG01 isn’t even out in public hands, yet here we are, already looking at follow-ups on a leaked roadmap. Here’s a quick run-down of the specs:

As far as release dates are concerned, we had heard Germany would be getting the TG01 this summer, which lines up with the mid-Q2 release date pictured here, while the TG02 and TG03 should be coming out in early and mid-Q4 respectively. The calendar also mentions Windows Mobile 7, so it’s entirely likely that any of these handsets from Toshiba will be compatible once it’s available. The roadmap also shows three mobile internet devices (K01, K02 and the fuel cell-powered L01) coming out in late ’09/early ’10, if you’re into that kind of thing. On the whole, it’s awesome to see Toshiba throwing in a few more chips with Qualcomm’s buxom Snapdragon processor, especially so soon after initially testing the waters. Many manufacturers would likely wait to see how the test case panned out before moving forward, but I guess Toshiba is good and sold on the chip.

As part of its partnership deal with Microsoft, it seems LG is moving toward launching a new Windows Mobile smartphone...