Patent application filings can be dry stuff. But, when Apple files for a new iPhone patent, the world listens. Up at bat this week is a new Apple patent application that hints at a future iPhone outfitted with a front-facing camera and a dynamic UI that changes based on motion detection.

While the front-facing camera confirms that video-chat is at least a topic if interest in Cupertino, the more juicy tech lies in Apple’s method for dynamically changing the iPhone UI based on the iPhone’s physical status.

The iPhone’s motion sensors would be able to detect when the user is taking a jog, for example. The UI would then adapt to display larger phone icons or music controls, making it easier to interact with the iPhone through jarring motions. The potential for activity-sensing technology is intriguing. Imagine an iPhone that knows when your in the bathroom and automatically silences incoming phone calls while serving up the day’s emails and rss feeds! (And don’t forget to hit up our smartphone-on-toilet poll!)

Apple most recently filed for “stealth” biometric security technology for the iPhone and Mac computers. The iPhone maker is apparently set on using embedded motion, light, biometric, etc. sensors in the iPhone for some interesting features in the future. Let’s hope Apple takes their patent ideas from drawing board to market! 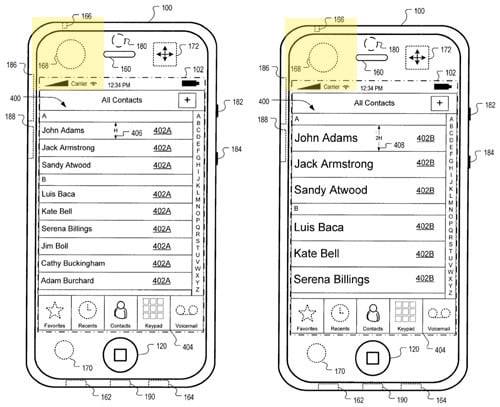 What, you can't wait a measley couple of months for Apple to put the polishing touches on the iPhone 3.0...