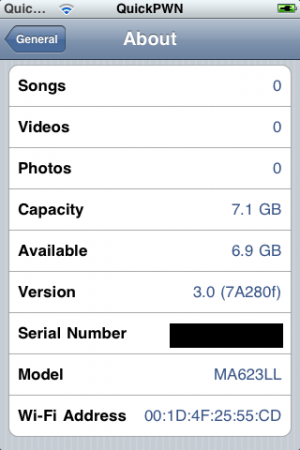 What, you can’t wait a measley couple of months for Apple to put the polishing touches on the iPhone 3.0 OS? Following on the release of QuickPWN 3.0 Beta 2, the most recent iPhone OS 3.0 Beta 3 release has already been jailbroken through QuickPWN! While not an official jailbreak solution from the iPhone Dev Team, QuickPWN 3.0 beta 3 is now ready to literally pwn your iPhone or iPhone 3G running a pre-release copy of iPhone OS 3.0 Beta 3.

Keep in mind that QuickPWN 3.0 Beta 3 is only intended for use by iPhone developers with legitimate iPhone Dev accounts. Installing any iPhone OS 3.0 beta firmware on a non-dev iPhone will render it mostly useless. Also keep in mind that QuickPWN does not create custom firmware packages that replace any newly-bundled baseband firmware with older, more compatible baseband firmware. As such, QuickPWN 3.0 Beta 3 won’t prevent a baseband flash, and may render your iPhone 3G unlockable by the iPhone Dev Team’s “yellowsn0w” iPhone 3G unlock utiltiy.

Still, for iPhone devs that absolutely need to jailbreak their iPhones for SSH-purposes, QuickPWN 3.0 Beta 3 should work just fine. Cydia isn’t yet compatible, but developer suarik is working on porting Cydia to iPhone 3.0 OS.

QuickPWN will install the RipDev’s “Icy” application. Once installed, launch “Icy” and use it to download whatever jailbreak utilities you might need.

The rest of the non-dev iPhone world will unfortunately have to wait for Apple to release the iPhone 3.0 OS to the world before even thinking about the jailbreak. Just a couple more months…

The iPhone has become more than just a phone. And, thanks to a wide range of iPhone applications that help...