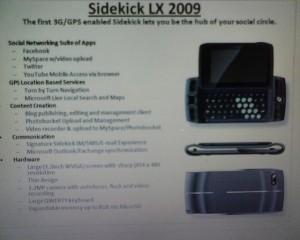 There’s nothing better than finding a leaked internal document that confirms previous rumors. The latest rumor to get the confirmation-hammer dropped on its head is the speculation that T-Mobile is preparing a 3G-capable Sidekick for 2009. An internal T-Mobile memo has been sent out to T-Mobile employees, notifying them to start preparing for the Sidekick LX 2009. The memo confirms what we’ve been waiting for – a new media-friendly Sidekick with full 3G support on T-Mobile AWS 3G network!

The T-Mobile Sidekick LX (2009) sports a 3.2-megapixel camera, GPS (Live Search), larger display, QWERTY keyboard and integrated support for YouTube, Facebook, MySpace and Twitter. Suffice it to say that the new generation of HipTop-wielding hipsters (sorry, couldn’t resist) will be surfing around all kinds of social networks and consuming all kinds of media. And, all over a 3G data connection, no less!

Get Ready for the New Sidekick LX

T-Mobile is preparing to launch the thinnest Sidekick ever, with blazing fast 3G connectivity for customers to connect with friends quickly and easily. The new Sidekick LX will come equipped with GPS enabled Live Search, a 3.2 megapixel camera, and free bundled social networking applications including Facebook, My Space, and Twitter. Customers will also be able to watch and download You Tube videos directly from the device. The new Sidekick LX comes equipped with the features that customers love including a full QWERTY keyboard and an enhanced swivel screen that is larger and sharper than any other Sidekick.

Additional information regarding launch dates, pricing and availablility will be available on the Retail Communication Home Page on April 17.

Remember those revised T-Mobile rate plans I told you about a little while ago? Only a few days after that...