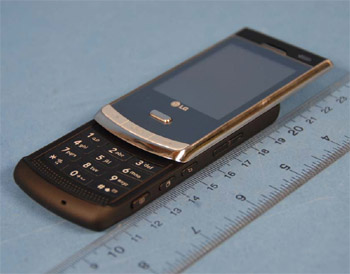 What would we do without FCC. For one thing, we wouldn’t know which phones are coming to the States, before operators or manufacturers announce them. That said, we’ve spotted the LG CF750 — which we know as the LG Secret — all in its AT&T glory at the Commission’s website.

All the specs from the original, global version, of the Secret remain on place — including the super thin body, Bluetooth, GPS receiver, microSD expansion slot, and of course, a 5 megapixel camera. However, user manual shows us LG has customized the device for AT&T’s specific needs, hence their Secret will have a special AT&T menu with such options as “AT&T GPS,” AT&T Music,” “Yelloo Pages,” “MEdia Net” and “MEdia Mall.” There’s also “Video Share” included in the mix, meaning you’ll be able to beam your clips to the Interwebs and share them with your buddies — all while on-the-go. Finally, to make the phone work with AT&T’s 3G network, radio has been changed and now it can sing along 850 and 1900 MHz frequency bands.

We’ve no idea when LG or AT&T will go all official with the Secret announcement, but now with the FCC clearance, it seems it’s all about the timing. In other words – what are you waiting folks? 🙂

Tracfone has a new entry-level device in its offering. It's the Samsung SGH-T201G, which is the operator's third device coming...