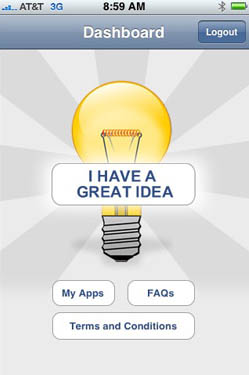 Have a great idea for an iPhone app but don’t know where to get started? Worried that if you share your idea, some developer may take the idea and run? Now, thanks to the folks at MEDL Mobile, you can become an iPhone app developer, right from the comfort of your own home… and if your idea is selected you’ll make some money too.

Following in the footsteps of MEDL’s successful App Incubator online, the company has launched a sibling incubator app available right now in the App Store. The appropriately titled ‘App Incubator’ app for iPhone is available for free in the App Store (iTunes Link), and opens up a whole new world of iPhone app development for those that are good with the ideas… But not so good with the programming and graphics.

“We’ve been blown away by the creativity of our ‘developer’ community…In the few days since the app went live, we have received literally thousands of submissions — and lots of them are very good.”

The app is self-explanitory. Whenever an idea strikes you, use the app to submit your ideas directly to the incubator. The idea will go through a series of tests and reviews, and if it passes, the development team on the other end might decide to turn your ideas and concepts into reality! Winning ideas are based on originality, functionality, simplicity, revenue opportunity… and fun. So, if you think you have an idea that could be the next big hit, but don’t have the team or resources to make it a reality, check out the App Incubator (iTunes Link) in the App Store and download it for free. Also be sure to hit up www.appincubator.com for more information.

‘Manage Your Football Club’ Coming Soon to the App Store

'Footy' fans, get ready for a new iPhone game coming to the App Store real soon... Called 'Manage Your Football...