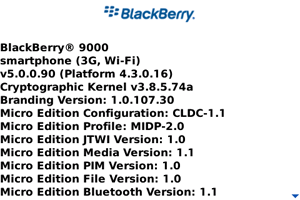 The latest BlackBerry operating system leaked out two weeks ago and now that everyone’s had some time to play around with it, the finer upgrades have been identified. Most of them require an appropriately updated BlackBerry Enterprise Server as well, which we’ve already heard will support remote file access, conference call-in functions and e-mail flags, but there’s plenty of new features on the way as well.

We’ve been seeing a lot of OS 5.0 lately, so odds are we’ll be seeing a public release in the fairly near future, probably WES on May 4th.

Lets keep it retro! I'm loving this new theme called 'Retro Phone' from Ahead of the Curve Designs. The theme...