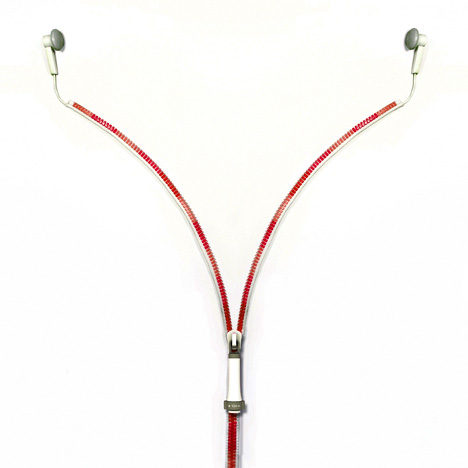 In an attempt to put an end to tangled headphone wires, designer Ji Woong has cooked up these headphones which are part and parcel of a zipper mechanism. Buying a coat with this built right into the hood, say, would be a surefire seller. The coolest part of all is probably the control mechanism built into the zipper tag – twist the outer-rim for volume adjustment and press on the button at the bottom to lock the control. It would be nice to have some more controls built in there, maybe use the main button for pause/play, throw some track skipping functions in with the volume dial, and a separate lock switch on the back.

The only problem when it comes to mobile is which plug to use… 3.5mm would offer the most versatility, but would leave a lot of Sony Ericsson users screwed, along with anyone stuck with 2.5mm. Stereo Bluetooth could solve all of that, but would require a few more controls on the zipper tag… Regardless, cool idea, and it would make sure you never forget your headphones at home again.

Today is the day that Bluetooth changes forever. As expected, the Bluetooth Special Interest Group (SIG) has gone official with...