Apple was expected to serve up their 1 Billionth (with a capital B) App Store download today, and lo and behold, Apple has announced that they’ve officially seen 1 billion iPhone/iPod Touch applications downloaded from their iTunes App Store! In less than a full year of existence, Apple and the iPhone have managed to make mobile applications as commonplace as an iTunes music purchase, and the App Store’s popularity continues to grow. 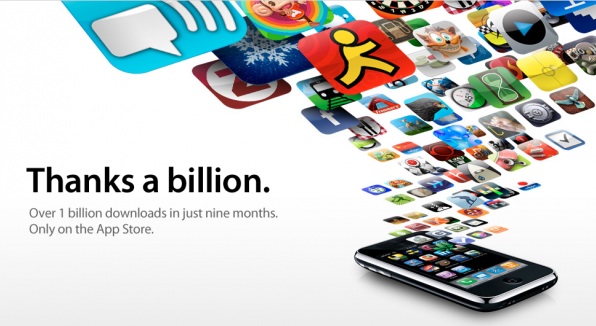 For the record, it took Apple six whole months to reach the 500-million milestone. From that point on, Apple needed just three additional months to hit the landmark 1 Billion download goal!

One estimate has 75% of the 1 billion downloaded apps being of the free-of-charge variety. That means just 1 of every 4 downloads put money in an iPhone developer’s (and Apple’s) pocket. But, that still accounts for 250 million payments going through the App Store!

Curious as to what the all-time most downloaded free and premium apps are? Here you go: (after the break)

The Popular App is Expanded to Include New Levels and Intuitive Touch Shooting Controls Konami announced today that the full...