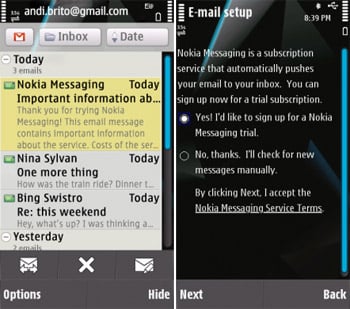 We know Nokia Messaging for touch-enabled Symbian S60 5th Edition is scheduled for May, but Nokia released a beta version of the application for those willing to try out new things. All of the features of the original Nokia Messaging client remain intact, hence the touch-enabled version can also sing along up to 10 POP3 or IMAP accounts, and/or also work with popular web-based email services such as Windows Live Hotmail, Yahoo! and Gmail.

As for the touch version features, Nokia highlights:

If you own the Nokia 5800 XM, you’re free to download the application and eventually share any comments you may have with the Nokia Messaging team. Again, the official release is set for May, and they say this will be the only beta version released in between.

And now it’s time for some video demonstration. Keep reading after the jump. 😉