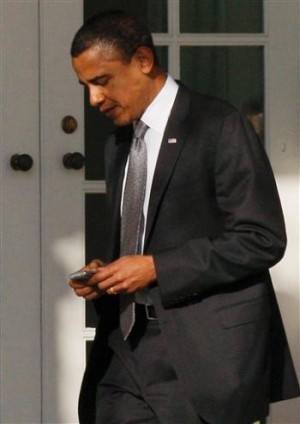 When Senator Barack Obama become President Barack Obama, the BlackBerry-wielding Commander-in-Chief was forced to give up his handy BlackBerry for anything but personal communications. The POTUS was given an NSA-certified Sectera Edge smartphone for all official communiques that intelligence-types would rather keep under encrypted lock-and-key. But, it seems the President just can’t do without his trusty BlackBerry 8830. Presumably at his request, the NSA is now working on a super-secure BlackBerry 8830 that will conform to NSA and federal encryption standards, allowing President Obama to do whatever it is that US Presidents do on his beloved BlackBerry.

A new report from the Washington Times indicates that the NSA is in the final stages of development on the President’s new BlackBerry 8830. Using Genesis Key Inc.’s SecureVoice software, the NSA is crafting custom BlackBerry 8830’s that can withstand hacker attacks and thwart eavesdropping spies. And, it looks like the rest of Obama’s BlackBerry-loving White House will be getting their very own spy-proof BlackBerry 8830 – First Lady Michelle Obama and some White House aides will apparently be rocking the NSA-made 8830 in short order.

Now, we have to wonder if President Obama will have the NSA craft customized BlackBerry handsets everytime RIM announces a new Curve. We’ll likely see RIM launching new Curve hardware sometime within the next few years. Will Obama be content with his aging 8830? We think not.