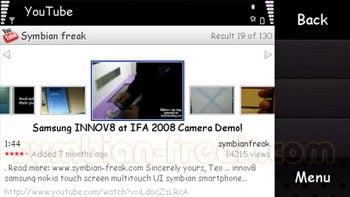 Remember the native YouTube client for Symbian S60 we’ve talked about some time ago? Well, Google has released an updated version to include support for touch-enabled devices, such as the Nokia 5800 XpressMusic and the upcoming Nokia N97.

The problem is that not all is shiny. Although you will be able to browse around clips, the playback remains limited to QVGA (320×240 pixels) resolution. Rest of the screen estate is simply not used. I guess YouTube has a single size clips for mobile videos and don’t want to use servers to additionally process files for Nokia’s pretty specific nHD screen resolution. Moreover, some people have reported problems with virtual keyboard which doesn’t appear all the time, making searching for videos impossible.

Still, it’s a nice move forward and I’m sure Google will tackle all the bugs eventually.

Final note – if you own the non-touch S60 device, you should NOT upgrade! The new version seems to have problems with playback of some clips on right speed, and some videos are played at 2x speed. Don’t say I haven’t warned you. If the current version works for you — wait a bit until the upgrade. 😉

We know Nokia Messaging for touch-enabled Symbian S60 5th Edition is scheduled for May, but Nokia released a beta version...