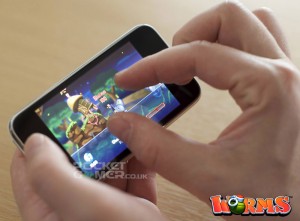 Oh, if I could count the number of times I had thrown explosive sheep, rained napalm, or prodded opposing invertebrates off cliffs in fantastically unrealistic landscapes in Team17’s Worms… The classic series that started way back in ’95 will be coming to the iPhone, as shown in some leaked pics of the game in action. We had heard THQ would be releasing a mobile version of an earlier iteration, Space Oddity, sometime this summer, but the screenshots looked like they would be for something other than iPhone… In any case, I seriously hope there will be some multiplayer capability, since playing with bots always lacked that certain je ne sais quois of unloading an uzi on a dear and close friend. Multiplayer gaming and voice chat was demonstrated on the 3.0 iPhone OS, and Worms would be a prime candidate for those features.

Late last week I downloaded the puzzle game 'Flood-It!' from LabPixies just for fun... I noticed it was one of...