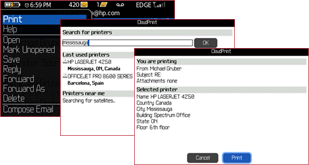 HP and RIM are now working together to pump out two products: CloudPrint and Operations Manager. The first lets you shoot your print jobs, be they documents or pictures, from your BlackBerry and have them shoot out of the nearest printer. The second is an addition in BES 5.0 which helps admins troubleshoot particular problems enterprise BlackBerry-users are having. HP had launched an iPhone app not too long ago which allowed you to print photos right from the device, so it’s easy to imagine something similar for BlackBerry that might focus a little closer on documents, but the BES-side product is a little hazier. I’ll be sure to get a closer look this afternoon at the press sessions. In the meantime, you can get more info from RIM here.

Man, Kevin's got some gall getting shots of the unreleased BlackBerry Gemini right at the Wireless Enterprise Symposium, RIM's biggest...