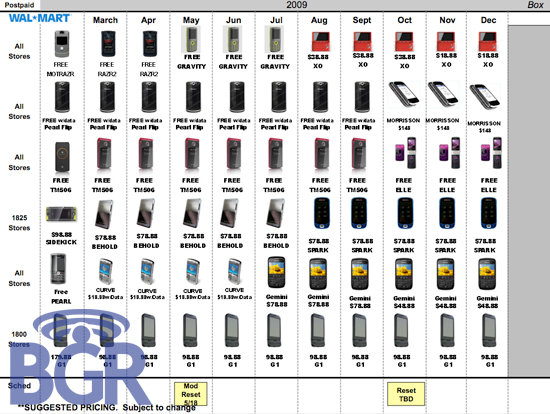 BGR has managed to get their hands on a T-Mobile roadmap for Walmart stores. The info we can glean from it is very interesting. First off, according to the leaked roadmap the BlackBerry 8520 will hit us as early as this July from $78! Only a few months later in October the price of the 8520 will drop to $48. Take a look at the actual document above for full details. Sure does seem like there are going to be a lot of freebies at Walmart locations… Freebies and the T-Mo G1. Sadly no instance of the G2/MyTouch 3G in this roadmap. Maybe that will change.

Note: Although this document sure does look official, I’d toss this in with the rumors for now. I’m always a little hesitant to say something is coming… especially when it’s a brand new device making its first appearance… At any rate it won’t be long ’till we know… July is just around the corner.

It seems Verizon Wireless is gearing toward launching not one but two cool products on May 17th. We've already mentioned...