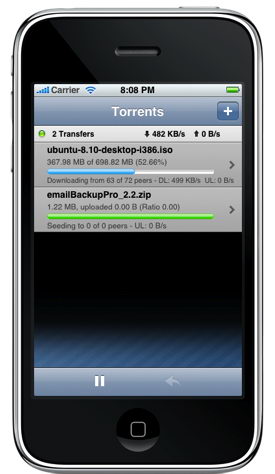 Maza Digital, the company behind RSS reader app for the Apple iPhone and iPod Touch called Trackr, is saying that their Transmission (BitTorrent client for Mac OS) remote control application Drivetrain has been rejected from the AppStore. After stating that the application required “unexpected additional time for review,” Maza received next email from Cupertino saying “this category of applications is often used for the purpose of infringing third party rights. We have chosen to not publish this type of application to the App Store.”

Obviously we can’t agree with Apple’s decision to reject Drivetrain. Even if they or their carrier partners don’t like BitTorrent clients on their network, this isn’t the case here. It’s a remote access application that allows users to manage their torrents on a Mac from a remote control. When you think about it, this could also be done with some generic remote access app — all you have to do is turn on a BitTorrent client on your PC/Mac and take it from there. So why on Earth Apple decided to shut Drivetrain is beyond me.

I wish I could say this is one-time mistake of the AppStore approval process, but we know quite a few other apps that have been rejected, while at the same time Baby Shaker cleared its way to the iPhone users. Weird!

Popular mobile application/service and the company I think it's worth acquiring, GyPSii, is now available in the AppStore, allowing iPhone...