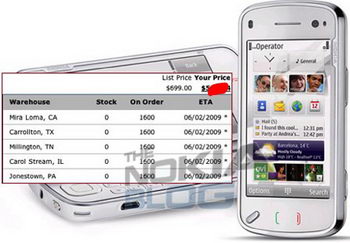 It seems Nokia’s flagship smartphone, N97, is heading to North America on June 2nd. That doesn’t mean you’ll be able to buy it on that day, that’s the shipping date for the Finnish giant’s distributors.

Apparently, they [Nokia] notified one of their major American partners of the estimated N97 NAM shipping date, and I guess they’ll be eager to start selling it as soon as they can. To make things clear, we’re talking about the version of the device with all the right bands to sing along AT&T’s and Rogers Wireless’ 3G networks.

Pre-orders have already started on some web stores, Nokia USA’s site included, so we’re kinda sure you’ll be able to grab your N97 unit in June, though we’re not sure whether it’s beginning, middle or the end of the month. As soon as we hear something new, we’ll let you know, k?

We're starting our little series here. Last Sunday was the first time we summed up some of the fake handsets...