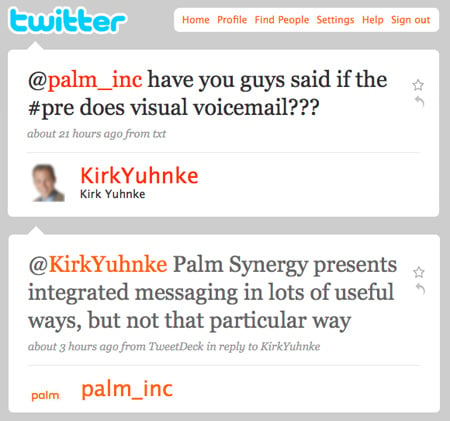 Palm recently received a question on Twitter about visual voicemail on the Pre, to which they evasively replied: “Palm Synergy presents integrated messaging in lots of useful ways, but not that particular way”. While unfortunate, there’s no need to really worry about the lack of native support, that just means we’ll have to rely on third parties like PhoneTag, Spinvox, and maybe even a mobile client for Google Voice to fill the gap. If you want to chalk one up for iPhone, go for it, but it’s unclear if the lack of a feature is a permanent shortcoming of Web OS, or if it’s something that will come in a later version down the line, perhaps on the Eos. It’s a bit of a downer, and on top of no memory card slot,  few details on battery life, and not video recording at launch, I think we’re all starting to get a more realistic picture of the Pre after the swooning factor has died down.

It seems that the final legal hurdle for launching the Palm Pre has been cleared. The Treo maker has pushed...