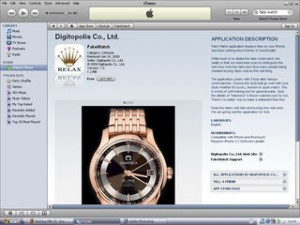 The iPhone has become a big target for legal-minded Americans looking to take a bite out of the Apple pie. But, most of the iPhone lawsuits to date have been filed by ordinary citizens, not big-name corporations like Cartier. This time around, the game has changed. Luxury lifestyle brand Cartier is more than a little miffed by Apple’s apparent infringement on its highly recognizable trademark, and they’ve filed suit against the iPhone maker to hammer that point home.

The lawsuit, filed Friday in a federal court in Manhattan, claims that iPhone applications like Digitopolis‘ Fake Watch and Fake Watch Gold Edition use Cartier’s trademarks without permission. Apple is being sued for allowing the applications into the iPhone AppStore.

Don’t bother trying to look up the iPhone applications, as they’ve been pulled from the AppStore as of this writing. It’s unclear what kind of compensation Cartier was looking to get, but it’s entirely possible that the lawsuit was a fast-track tactic to get the offending iPhone applications taken down.

[Update]
Hours after filing the suit against Apple, Cartier withdrew the lawsuit. It seems Cartier’s legal maneuvering may have indeed been aimed at nothing more than getting Apple to pull the offending iPhone apps off the AppStore.

You might remember I am a fan of the clever app-implementations that are Notescasts (here for example) - so it's...