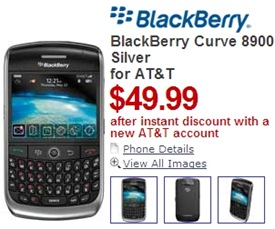 Wow, it sure didn’t take long for the BlackBerry 8900 to take a big price drop. Amazon, Newegg and AT&T have all now dropped the price on the 8900 to $49.99 (no mail-in rebate necessary) on a new contract. I can’t see the price dropping much further than this… But the one thing we can glean from this is… There’s got to be more BlackBerry goodness on the way! Whenever we start to notice price drops on existing models it’s only a matter of time before we start to see new Berry models. We’ve seen a bunch of evidence of this recently in the form of the BlackBerry Onyx, Aries and Storm 2. Oh, and lets not forget about the Driftwood and Magnum as well!

Happy BlackBerry Curve 8900 shopping. $50 is a great deal for a solid device.