Nokia’s Ovi Store launch today has turned into something of a launch-day fiasco. The launch of the Ovi Store was to be Nokia’s triumphant answer to Apple’s iTunes store and the highly integrated iPhone AppStore. Alas, things didn’t go according to plan. Nokia’s Ovi Store is apparently suffering from server problems, UI funkiness and overall crappy performance that prove not even the world’s largest mobile phone manufacturer is immune to launch snafus. 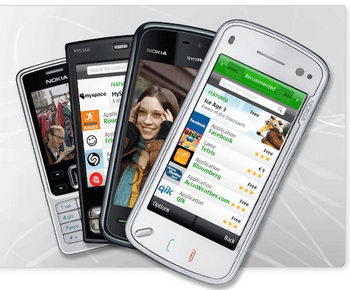 pages and convoluted navigation structure. If you happen to load a page, which will still take a handful of seconds, you’ll find that searches for certain applications often result in zero results (if you’re lucky) or frozen store-pages. Sub-categories, according to All About Symbian, are just plain cryptic (you have to go through Options>Categories). Content is still woefully lacking and content purchases are annoyingly involved.

Nokia blames server problems for their Ovi Store issues, but the problems with Ovi Store are deeper than just laggy servers. In the end, Nokia still has a lot of work to do on the Ovi Store. The iPhone and MobileMe caused a good deal of trouble for Apple on their launch, but Apple eventually got it right.

This is what Nokia wanted to world to see in the Ovi Store:

“Today is one of those monolithic milestones for Nokia and the advancement of mobiles, as Ovi Store has officially gone live. It’s a moment that many believe is set to spark a rapid evolution in the way we all use our mobile devices – exploring the depths of what your device is capable will be far easier with Ovi Store now primed to be the one-stop hub to let you soak up bite-size bits of free and paid-for content and apps.”

This is what Nokia PR has settled on:

“Shortly after launching the Ovi Store at 2 am ET, we began experiencing extraordinarily high spikes of traffic that resulted in some performance issues for users accessing store.ovi.com and store.ovi.mobi. We immediately began to address this issue by adding servers, which resulted in intermittent performance improvements. We apologize for any inconvenience this may have caused Ovi Store users and encourage you to continue giving us feedback as we develop the service further.

The Ovi Store device client, however, has continued to perform very well and there were no reported issues from users logged on through that entry point.”

We were hesitant to believe that Apple was years ahead of the competition in touchscreen UI and integrated media distribution, but that does seem to be the case here.