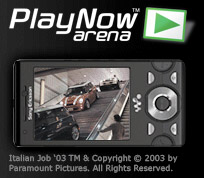 It’s not just the three phones Sony Ericsson has announced today. The Swedish-Japanese company also unveiled PlayNow arena with movies, a bundled movie service which will come included out-of-the-box for selected handsets. In that sense, when bundled with the device purchase, you can think of it as a version of Nokia’s Comes With Music scheme, only that this time the device Comes With Movies. 😉

Users of the service will be able to watch up to 60 movies a year on their mobile phone, choosing from a selection of around 15 movies at any one time, with additional titles being added to the catalogue each month. Naturally, movies will come specially optimized for mobile viewing, and additionally formatted to match the performance of a user’s phone.

Here’s how the service works:

PlayNow arena with movies will make its debut with the W995 Walkman handset, launching in Sweden, Norway, the Netherlands, Germany and the UK from June 2009. Additionally, the service will also be made available on upcoming phones such as Satio and Aino.