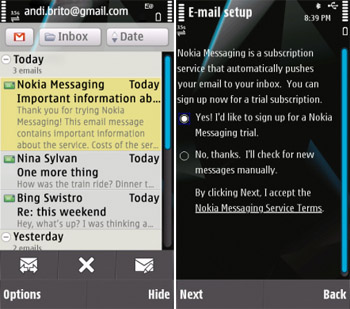 It wasn’t that long ago that Nokia Beta Labs unveiled a beta version of the Nokia Messaging client for Symbian S60 5th Edition devices such as the Nokia 5800 XpressMusic and Nokia N97. Now they’ve announced that the client is out of beta, ready for download from email.nokia.com. Some small bugs have been fixed and the application has been been translated into twenty more languages.

Moreover, the same notice also mentions next version of the client, which should be released during the summer. Among the features it will include are support for HTML email and APN destinations, homescreen integration, as well as minor UI enhancements such as scrolling.

Hear that? Nokia is listening, so keep sending them your feedback! 😉

Actually, HTC released a new ROM update for the AT&T Fuze (the HTC Touch Pro with AT&T branding), only to...