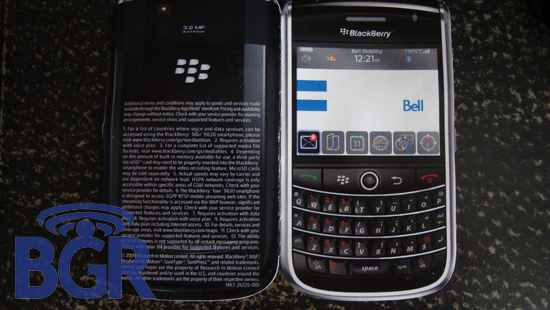 It’s no news that Bell (or Verizon and Telus, for that matter) is getting the BlackBerry 9630 Tour, the first proper, new BlackBerry to hit CDMA carriers in awhile, but promotional materials are starting to float into Bell stores across Canada, signalling an imminent launch. As with most Bell BlackBerrys in recent memory, the Tour is world-capable, able to cruise international GSM and CDMA bands willy-nilly, and hosts the usual pickings from the latest devices (480 x 360 display, 3.2 megapixel camera, Bold-style keypad). Of course, Wi-Fi is left out, but every BB has to have a hole, apparently. No release date yet, but keep your eyes peeled, it could be any day now.

AT&T, Amazon and NewEgg have been busy slashing the price of BlackBerry devices recently. Last I heard the BlackBerry 8900...