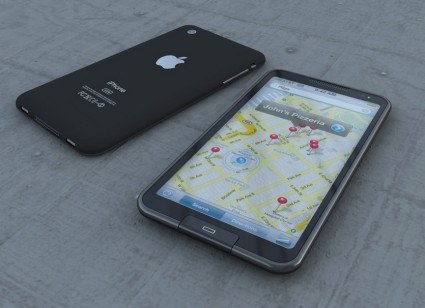 This is a concept, a mockup, a fake. But it sure does look pretty!

As much as we’d like our headlines to read without question marks, everything we’re seeing and hearing about the new iPhone is still just speculation. Come tomorrow morning, at Apple’s WWDC 2009 keynote, we’ll know which rumors panned out and which rumors sank like a rock. Until then, rumors are all we have to go on.

The latest rumblings along the iPhone grapevine have Apple getting ready to introduce their next-generation iPhone as the iPhone 3GS. No, that’s not a typo. Daring Fireball is predicting the next iPhone’s model name will be the iPhone 3GS – more of an upgraded “step up” from the current iPhone 3G than a radically iPhone.

John Gruber predicts that the new iPhone 3GS will double-up on processor speed, RAM and on-board storage. The iPhone 3GS will be offered at $199 and $299 price-points for the 16GB and 32GB iPhone 3GS, respectively. The lower-priced iPhone, according to Gruber, will end up being the current 8GB iPhone 3G – priced at just $99. We may even see the new iPhone price go live on Monday (but that would kill all hopes for an iPhone Nano).

The iPhone 3GS – it’s only a matter of hours before we know for sure. Keep checking back with IntoMobile as we bring you live coverage of the WWDC keynote tomorrow morning at 10AM PST (Pacific Standard Time).

While Palm Pre fans are still coming to terms with the Palm Pre's sell-out launch success on Sprint's US network,...