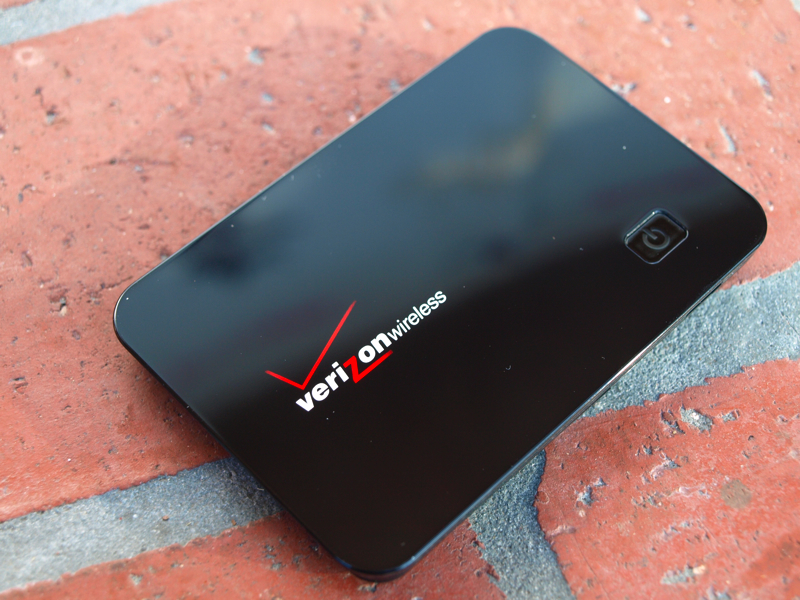 There aren’t too many sweeter combinations of words to hear than “portable” and “hotspot.” Especially for mobile geeks enthusiasts like me. Imagine my excitement when Verizon Wireless announced their own-branded version of Novatel’s MiFi Intelligent Portable Hotspot, the Verizon MiFi 2200! A self-contained WiFi router that fits in my pocket? Yes please.

Tipping the scales at a scant 2.05 ounces and measuring a credit card-like 8.8mm thick, the Verizon MiFi 2200 Portable WiFi Hotspot is smaller than my laptop mouse. But, my mouse can’t broadcast its own WiFi network out to five separate WiFi devices while serving up data from Verizon’s 3G (EVDO Rev. A) data network.

The Verizon MiFi 2200 promises something like 4 hours of WiFi data connectivity for up to five WiFi-enabled mobile devices (laptops, smartphones, cameras, printers… you get the idea), with almost two days of stand-by time, thanks to that integrated Li-ion battery. But, can a 3G router barely bigger than a few stacked credit cards deliver near-broadband data speeds reliably and conveniently? 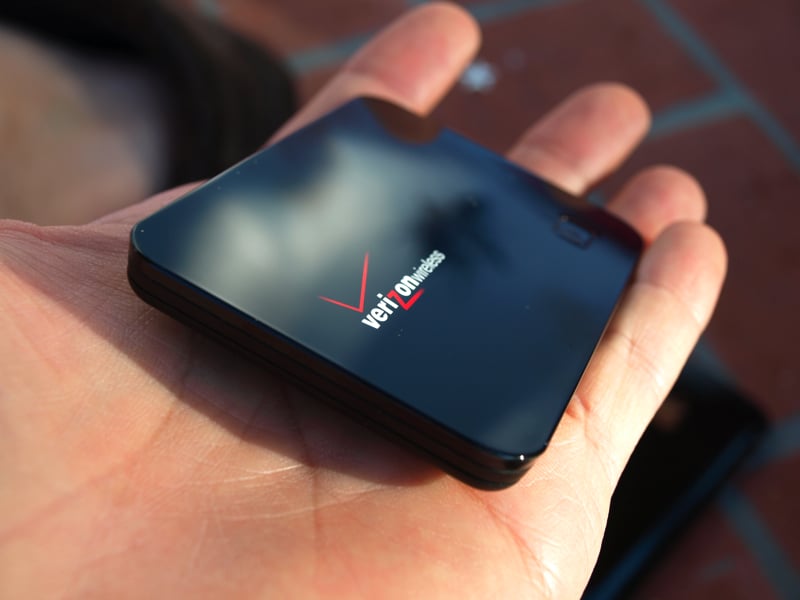 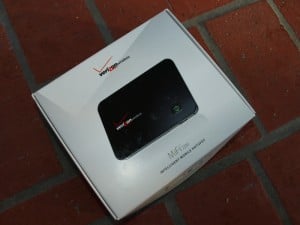 Portable 3G hotspots aren’t exactly new. But, until now, these solutions were basically full-sized WiFi routers with nothing more than a slot for your broadband data card. The MiFi Portable HotSpot does everything those clunky old 3G routers can do, but it shrinks everything down to the size of a really thick credit card – with an on-board operating system and integrated Li-ion battery to boot!

The Verizon MiFi 2200 pulls down data from Verizon’s 3G (EVDO Rev. A) data network, and serves it up via WiFi to connected WiFi devices. And it’s dead simple to setup.

I took the MiFi 2200 out of the box, taking a moment to admire its glossy shine that I knew would be very short-lived. I connected the MiFi to my computer with a microUSB-to-USB cable, installed the VZAccess Manager software that comes bundled on the MiFi’s on-board memory and, with one click, activated the MiFi 2200 on Verizon Wireless’s network. The power button glowed green to let me know that the MiFi 2200 was powered up and green signal indicator told me it was ready to do my bidding. 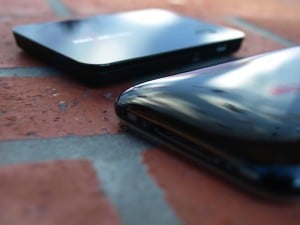 To use the MiFi 2200 as a USB-tethered 3G modem, simply plug the MiFi into your computer’s USB port. The MiFi will automatically power up and lock onto Verizon’s network. Using the MiFi in USB mode requires you use VZAccess Manager to log onto Verizon’s data network. This isn’t as convenient as the WiFi mode, but allows you to turn off your computer’s WiFi radio to save battery power.

WiFi mode is the simplest way to use the Verizon MiFi 2200. Simply power up the device and connect your WiFi device to the MiFi. Network SSID and password are conveniently printed on the back of the MiFi.

The only way to get a more accurate read on your battery’s status, other than the “full,” “not full” and “almost dead” updates provided by the glowing power button, is to check the VZAccess Manager window or log into the router’s web interface. A physical battery meter somewhere on the MiFi 2200 would have been a nice feature.

The MiFi charges via microUSB (the new standardized charging port for all mobile devices). That means all you need to do is carry around a microUSB-to-USB cable and you’re set. Plug the microUSB cable into your car’s cigarette lighter adapter, home wall adapter, or your computer to charge the MiFi. Even better, you can charge the MiFi while using its WiFi!

Data Speed
More important than the MiFi’s ease of use is its wireless performance. Does this credit card-sized 3G router really deliver decent  data speeds?

I wasn’t expecting too much out of the MiFi 2200. It’s just so darn small. To my surprise, however, the MiFi 2200 consistently served up data no slower than 1.7Mbps. If you don’t have any reception on Verizon’s network, you’re obviously not getting any data service. But, testing throughout much of Los Angeles showed that Verizon’s data network is capable of EVDO Rev. A speeds almost everywhere in the city. Latency was reliable at around 100ms.

At the time of this writing, the MiFi 2200 hit 2.6Mbps on the downlink with 0.51Mbps (510Kbps) on the uplink, with a 96ms ping time. Impressive, right? Well, even more impressive is that this kind of data speed wasn’t that big of a surprise, I’ve seen it a couple times before.

Put it this way, the MiFi 2200 can stream just about any video (like Hulu) without so much as a hiccup. Higher-resolution video streams (like Hulu HD) might cause a few hiccups, depending on the service in your area, but can usually stream without too much trouble. 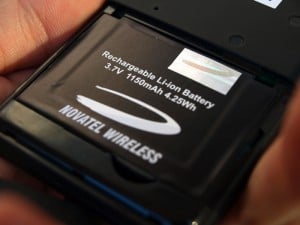 Battery life. What about battery life? At less than 0.5 inches thin, how could the MiFi 2200 last for more than a couple hours? Well, I have no idea how they do it, but Verizon’s MiFi 2200 manages a solid 4 hours of continuous use. I didn’t test it with four hours of continuous video streaming, but I’m sure it could manage just fine.

I rarely sit at any one place for more than four hours, so the Verizon MiFi 2200’s battery life is more than enough for me. But, harder-core road warriors might need more power – which is why Novatel designed the MiFi with a user-swappable Li-ion battery.

Stand-by times are pretty much what is quoted on the box. I’m not sure if its exactly 40 hours, but it’s definitely longer than a day and a half. Impressive! 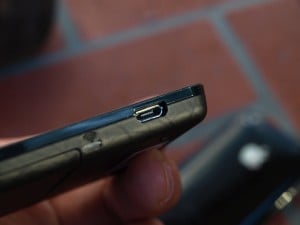 Linux-based OS
The Verizon MiFi 2200 comes with an on-board Linux-based OS that is capable of running network management software on the device. I didn’t have a chance to test out this feature, but according to Novatel, the MiFi can natively host network security applications. That means system administrators won’t have to worry about installing network security applications on every corporate smartphone in the fleet – simply install the security software on the MiFi itself, and every connected WiFi device is protected and managed by that software. If I was a corporate IT director, I’d want to make sure that every mobile employee was issued a MiFi.

I’m sure these are minor issues for most people, but corporate types might want to take note.

The Verizon MiFi 2200 isn’t the only MiFi available in the US, so I can’t speak for all MiFi variants, but Verizon’s MiFi 2200 definitely delivers on all its promises. It truly is portable (my wallet is bigger than the MiFi 2200!). It delivers broadband-like data speeds on a reliable basis. Battery life is as long as claimed, but still leaves room for improvement.

One of the biggest problems I’ve had in using the MiFi is that, no matter where I’m working, everyone asks about the MiFi.  People ask me for access to my portable WiFi network, others just chat me up about the blinking plastic slab on my table. It can get a little annoying, but it’s a good problem to have! 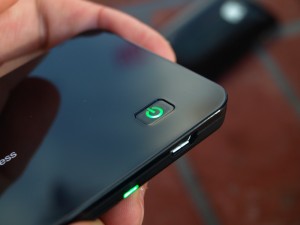