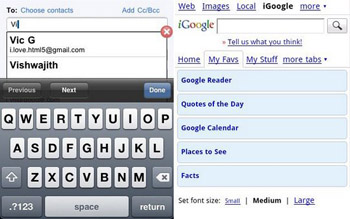 Google has issued updates for its web-based Gmail and iGoogle for the Apple iPhone and Android-powered devices (HTC Dream/Magic).

First comes Gmail that now features faster email address auto-complete, which I guess is due to a brand new (re-coded) JavaScript used for the function. iPhone firmware 2.2.1 is required for the iPhone users, while Android handset owners are good to go “as is.”

Another update Gmail got is for the HTC Dream/T-Mobile G1 users, only. Gmail now supports keyboard shortcuts, allowing you to use familiar keys to quickly move through your inbox — i.e. “u” returns you to the inbox while “n” moves you to the next conversation.

As for the iGoogle, it has been updated to be faster and easier to use. Tabs are now supported as well as more Google Gadgets, including those made by the third parties. You can rearrange gadgets and have them appear in that order on on your iPhone/Android-device, only — changing the order from here won’t affect your desktop version of iGoogle.

Finally, Google’s translation team also deserved mentioning, as iGoogle is now available in total of 38 languages, which is neat…