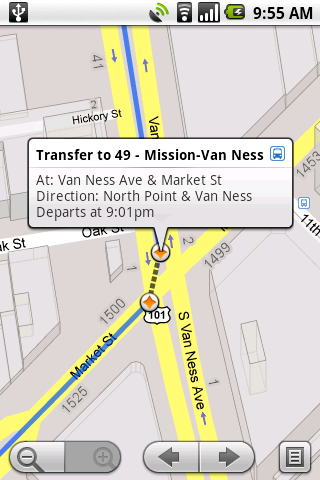 Google has already played with voice search on their vanilla app, but now they’re bringing the technique to their mobile maps application on Android. More importantly, they’re including transit and walking directions in the update. It’s actually pretty funny timing, since I’ve been playing around with the Rogers HTC Magic (review coming this week) and one of my first complaints was the lack of transit directions that the BlackBerry app has already been enjoying for awhile. Another interesting and new feature is called “Updates”, that lets you append a message to your Latitude location for friends to see; something along the lines of “Hey guys, I’ve got a great view from over here” or “Don’t come over here, there are, like, a TON of zombies”. It would be cool if this feature were public so you could just talk openly to whoever was in the area, like a localized Twitter. To get the update, find Google Maps in the Market and get downloading.

Update: Just installed, and I can’t seem to find Street View or figure out how to make the voice recognition go… Hmm… Now you have to long-press on a road and tap the address bubble for Street View.

We all know the T-Mobile myTouch 3G is coming... But here's a little more fuel to throw on the fire....