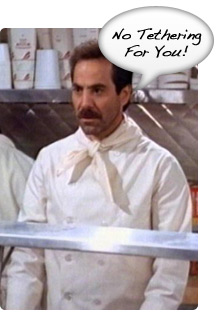 Looks like the folks over at the Pre Dev Wiki have been warned by the execs and legal team over at Sprint. Why? Sprint has taken up issue with the many tethering discussions found on their site and IRC channel. Me thinks that much discussion will go on anyway… At this point Sprint does not have a plan available for the Pre that allows tethering…However, once Palm’s exclusivity deal on the Pre is over, Palm may be forced to change this due to competition and options given from other carriers.

“We have been politely cautioned by Palm that any discussion of tethering during the Sprint exclusivity period (and perhaps beyond—we don’t know yet) will probably cause Sprint to complain to Palm, and if that happened then Palm would be forced to react against the people running the IRC channel and this wiki. We want to retain a good relationship with Palm, hence we are not allowing discussion of tethering on the IRC channel, or in this wiki.

Note that Sprint does not have a plan available for use with the Pre which allows tethering under the Terms Of Service.

Once there is a version of the Pre available for a carrier that does allow tethering, or an unlocked GSM version, then we may be able to change this policy.”

The Pre Dev Wiki is trying to stay in Sprint/Palm’s good books. Probably a good idea.

Palm Pre Off to Europe in September?

A daily financial paper in Romania called the Ziarul Financiar is claiming that the Palm Pre will be set to...