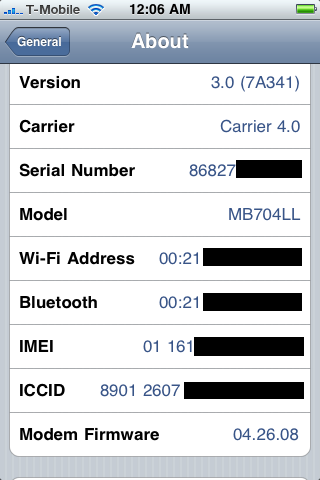 It’s about to snow in the middle of Summer (kind of, keep reading)! The infamous iPhone Dev Team has announced on their blog that they are preparing to demonstrate their latest “ultrasn0w” unlock solution for the almost-released iPhone OS 3.0. The Team will be demonstrating the new yellowsn0w utility in a live video demonstration later today. The video demonstration will confirm that The Team has successfully unlocked the official iPhone OS 3.0 to roam freely between GSM carriers, paving the way for a public release in the near future.

[Update4]
So here’s where we stand. The previous iPhone 3G software unlock utility known as “yellowsn0w” is no more. Instead, the iPhone Dev Team has released a new iPhone 3G software unlock solution, known as “ultrasn0w.” With iPhone OS 3.0, Apple apparently sealed up baseband exploit that allowed yellowsn0w to work it’s magic. The new “ultrasn0w” unlock utility is aimed at unlocking any iPhone 3G as long as it’s running iPhone 3.0 OS.

The Team is aiming for a Friday release of the new ultrasn0w software unlock for all you iPhone 3G users just itching to pull the trigger on the upgrade to iPhone 3.0 OS.

We’re expecting to see the iPhone OS 3.0 jailbroken and unlocked shortly after the official launch of the 3.0 software this Friday June 19th.

[Update]
MuscleNerd has posted the start-time for the iPhone 3.0 OS unlock demonstration. The demo will start at around 7:15PM PST (Pacific Standard Time – MuscleNerd calls it “L.A. time”). Link will probably be posted soon. Stay tuned!

Don’t forget to enter for your chance to win 1 of 3 iPhone 3G S’s that we’re giving away in just a couple days! IntoMobile’s iPhone 3G S Launch Day Giveaway Bonanza

White House supports repeal of tax on personal cellphone use

Things are slowly moving forward in the US wireless ecosystem. The White House has announced that it will back an...