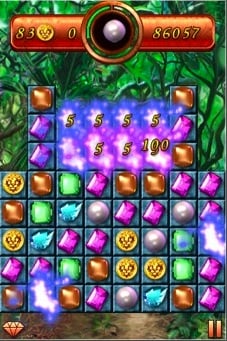 Based On the Best-Selling Adventure Match 3 for PC, iPhone Version Now Available at the Apple ® App Store

I-Play has announced that the brand-new Jewel Quest Deluxe for iPhone, iPod touch and mobile is now available for download. The newest installment of the top-selling Jewel Quest franchise-which has generated over 7 million downloads-Jewel Quest Deluxe is the most advanced Match 3 game to date. The game features a host of new modes including Multiplayer Pass & Play and Battle Mode – which brings players into a heated head-to-head competition to uncover jewels and solve mysterious puzzles.

In Jewel Quest Deluxe for iPhone, iPod touch and mobile, players battle against eight clever opponents and clear the jewel board through 36 levels. As they progress through the story, they will face challenging adventures in a city by the Ganges, the Indian jungles and Indian desert.  Providing the most seasoned Match 3 player with mind-bending challenges, even Quest masters will need to be at the top of their game to unlock power-ups and hidden hammer powers during battle. Those looking for an even greater challenge will enjoy the brand-new multi-player Pass & Play Mode, where players face off with friends to clear the jewel board. Additionally, players can opt for rapid jewel matching challenges in Quick Play Mode to sharpen puzzle skills in a snap.

The follow-up to Jewel Quest 2, which was one of the top Apps of 2008, Jewel Quest Deluxe for iPhone contains many additional exclusive features including stunning 3D animations, graphics and visual effects perfectly tailored for flawless touch-screen controls. Enhancing the experience even more are an exotic, Indian-themed soundtrack, and the ability to challenge friends and foes with WiFi multiplayer capabilities. Players wishing to flaunt their extraordinary scores can share online using Facebook Connect to bring buddies into battle.

Glu Mobile has announced the launch of Ice Age: Dawn of the Dinosaurs for mobile handsets worldwide. This is Glu’s...