Update: Stefan here, I’m turning off comments to this post since the contest is over. Will is going to get in touch with the three winners once he recovers after 12 hours of camping for the iPhone 3G S. Thanks to everyone who participated! 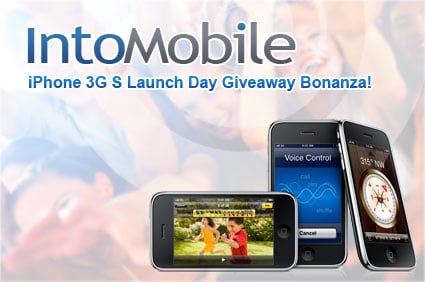 What could be better than a faster, more powerful iPhone launching this Friday?

Whether you’re still bitter about AT&T’s decision to penalize current customers with an iPhone “loyalty tax,” or just cringing at the $199 entry-price for the 16GB iPhone 3G S, IntoMobile is here to help.

You still have time to enter, but you’d better enter quick! The first two iPhone 3G S winners will be announced at 4PM PST (Los Angeles time). We’ll announce the winners on the front-page (either in this post or a separate post). You can continue to enter until 11:59PM – we’ll be announcing the winner of our BONUS iPhone 3G S live from IntoMobile’s iPhone 3G S launch live-cast. We’ll be live-streaming the launch-day crowds at Santa Monica’s Third Street Promenade Apple Store starting later tonight!

[Update]
Two winners have already been selected. Congratulations to Twitter user deanna_j and commentor Rob Werther on winning an iPhone 3G S! (Now all they have to do is contact IntoMobile)

The final winner of our one remaining iPhone 3G S will be picked tonight, live from Santa Monica Third Street Promenade Apple Store. We’ll be covering the launch festivities (and lines) live, so make sure to tune in tonight for our live-cast!

Announcing the IntoMobile iPhone 3G S Launch Day Giveaway Bonanza! Here’s what IntoMobile is doing to take the pain out of upgrading to an iPhone 3G S:

We’re not actually giving away 3 iPhone 3G S’s, that would be a logistical nightmare. Instead, we are giving away THREE (3) $200 Apple Store gift cards.

Three ways to enter the contest:

The rules – follow them or be disqualified, it’s that simple:

The three hottest smartphones in North America are pitted against each other by C|Net. The tests include: boot up speed...