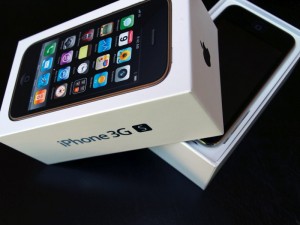 It’s been done many times over already, so I figured I might as well jump on the bandwagon. It’s iPhone 3G S unboxing time!

Being in California, I was one of the last people on planet Earth to get their hands on the iPhone 3G S, what with time zones being what they are. Why should I let some time zone technicalities keep me from pretend-unboxing my new iPhone 3G S?

The iPhone 3G S of choice for me was the 32GB White iPhone 3G S. My 16GB iPhone 3G is Black, so I figured I might as well spice it up a little. As you can see from the pics, the iPhone 3G S packaging is identical to the iPhone 3G’s box, “iPhone 3G S” branding excepted. Aside from the “32GB” storage capacity printed on the back of the iPhone 3G S, it’s fairly difficult to distinguish the faster, more capable iPhone 3G S from its iPhone 3G forebears. A little “S” badge (we preferred ours blinged-out) would have been a nice way to inject some model differentiation into Apple’s newly-expanded iPhone lineup. 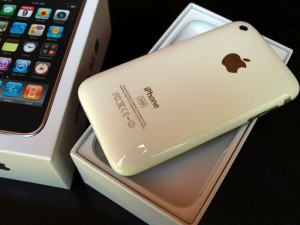 “S” proves itself deserving of the new moniker that Apple says “stands for speed.” Websites load with more snap and urgency, putting that 3G data connection to good use. And, with added RAM, I can surf the web to my heart’s content without worrying about bogging down the iPhone. And, speaking of not bogging down, iPhone apps launch without any of the hesitation that plagued previous iPhones.

As for the iPhone 3G S-only features – they rock. A simple tap of the video-camera icon switches to the auto-focusing camcorder mode. The compass is geeky-cool, but really hasn’t yet shown off its potential. Ever since we first laid eyes on augmented reality concepts back in the day, it was clear that magnetometer-equipped (digital compass) smartphones with integrated GPS  hardware had the potential to change the way we communicate and navigate the meta-world around us. As Stefan so aptly pointed out, the digital compass may be the single-most compelling feature on the iPhone 3G S. Better battery life, faster load times, video recording/editing, more RAM and 3D graphics all be damned – it’s all about the compass.