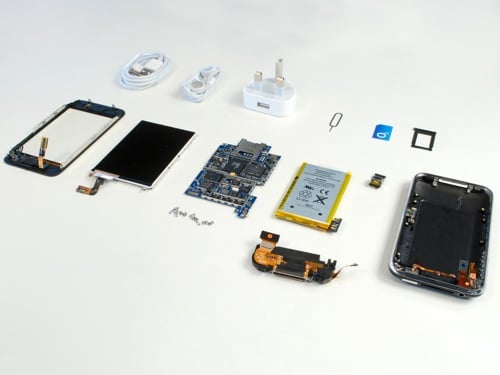 Stefan reported previously that a hardware website had performed some surgery on the iPhone 3GS, and split it open for all to see. Well now there’s another site that has taken things to same level…

iFixit flew over to the UK, and paired up with Macworld to do some hardcore hardware-opening on the 3GS – with really quite excellent results! Find their points of interest below, but do also check out their very cool site here:

* Thankfully, opening the iPhone 3G S is as simple as the 3G. After
removing two Phillips screws, the two halves of the phone are separated
easily using a suction cup.

* The iPhone is differentiated externally only by a new model number,
A1303. The lettering on the back is now shiny, like the Apple logo.

* The internal physical design is virtually identical to the iPhone 3G.
A random passerby on the street would not know the difference. Heck,
even we were struggling to differentiate the two.

* There’s still a “Do not remove” sticker above the logic board.
Naturally, we removed it.

* Nearly all components have been relocated to the front side of the
main PCB, including the Bluetooth, Wi-Fi, and Flash memory chips.

* The battery is 4.51 Watt-hours, or 1219 mAh. That’s about 6% larger
than the iPhone 3G’s battery. Hopefully the hardware runs more
efficiently, since increased battery life will not come from the battery
itself.

* There is an additional antenna connection near the dock connector.
We’re not sure what for just yet. However, we do love exploring these
teasers… Stay tuned!

* For those who are wondering about the fingerprint-resistant coating on
their iPhone 3G S screen: The oleophobic, or oil-proof, technology
evolved from waterproofing. Oil-proof technology is harder to achieve as
oil has a much lower surface tension than water, so it spreads out
easier and thus is harder to get rid off. MIT’s solution was to create a
coating material which creates a layer of micro fibers, but with a much
larger contact angle between the oil droplets and the fibers.

UK: iPhone launch – checking out who sold what…

Much like secret squirrel on his various missions, tomorrow I plan to go and check out my local O2 and...