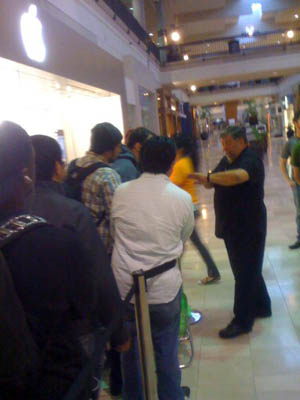 Surely Apple co-founder Steve Wozniak could get his hands on a the new iPhone 3G S without waiting in line, right? I mean, you would have to think someone at Apple would gladly have a 3G S delivered straight to the Woz… That’s what most would think.

However, this morning in San Jose at the Valley Fair Apple Store, MacRumors member djrayz was surprised to find the one and only Woz on the scene! Around 4:30 in the morning Woz showed up and very politely asked if he could be first in line. The lineup obliged and the Woz was the first to get the 3G S shortly before 6 in the morning. What a guy.

I’d probably be more than a little miffed if it was anyone else, but for the Woz one can’t help but let him do what he pleases. djrayz was also lucky enough to have Wozniak sign his new iPhone 3G S box, so he’s one of the few (I’m sure he signed more than a few more!) to have the iPhone 3G S ‘Woz’ edition 🙂 Cool stuff.