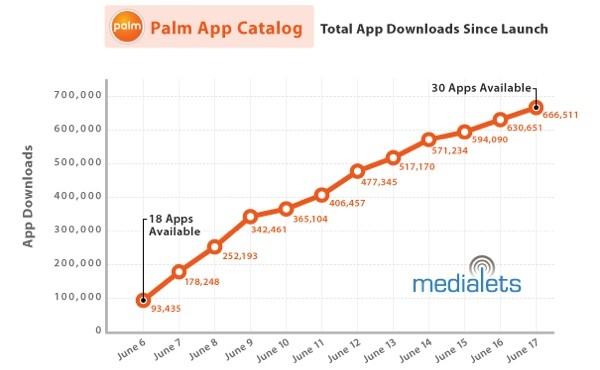 In the two weeks after the Palm Pre’s launch, which saw Sprint stores across the country selling-out of Palm Pre stock, the iPhone 3G S was the talk of the town. Fortunately for Palm, the Pre is back in the spotlight. This time, we take a look at the Pre and its ability to drive downloads from the App Catalogue, Palm’s own WebOS applications store.

Medialets has announced download statistics for Palm’s App Catalogue, and things are looking a bit sad. After two weeks in operation, the App Catalogue has seen just shy of 700,000 WebOS application downloads. That number might sound like a lot, and it is, but compared to Apple’s AppStore, Palm has a lot of catching up to do.

At the end of its first month in service, the iPhone AppStore pushed some 60 million apps to iPhone and iPod Touch users. By the six-month mark, Apple announced that 500 million apps had already been downloaded. Compare those figure to Palm’s 700K downloads, and things start to look a little less rosy for Palm. One of the biggest problems? The lack of WebOS apps on the App Catalogue.

Palm has already taken steps to embrace the developer community. With good community support and a WebOS SDK release, we could see the Palm App Catalogue explode with tons of new WebOS apps. At launch, the App Catalogue boasted just 18 apps. It now is home to 30 apps. In comparison, the AppStore had over 500 apps on deck for its inaugural launch.

Let’s say Palm has 100,000 Palm Pre’s activated in the US (a conservative guess based on launch-weekend sales estimates of around 100,000). That means each and every Palm Pre user had to download about seven apps from the App Catalogue in the past two weeks. That’s a fairly healthy number of app downloads per handset, especially given that there are just 30 apps available to date. With a little more time and some serious developer support, the App Catalogue might soon gain the traction it needs to take on the AppStore.

Remember the Palm Pre? The other super-hyped smartphone from Palm? The one that launched a couple weeks ago? Fine, well,...