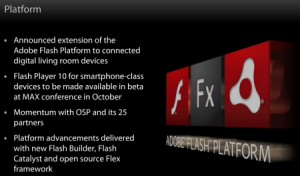 We’ve been waiting for it to happen. Adobe’s Flash technology has been slow to make a big push into the mobile space, Adobe it looks like Adobe will finally go live with their anticipated Flash Player 10 beta this October! The arrival of Flash Player 10 beta release for smarpthones will bring the mobile world one step closer to a truly mobile web.

“We are bringing Flash Player 10 to smartphone class devices to enable the latest web browsing experience. Multiple partners have already received early version of this release and we expect to release a beta version for developers at our Max conference in October. Google’s Android, Nokia’s Symbian OS, Windows Mobile and the new Palm Web OS will be the first devices to support web browsing with the new Flash player…”

Of course, seeing all kinds of Windows Mobile, Symbian OS, WebOS (Palm Pre!) and Android OS-powered smartphones running around with full Flash support is going to make it harder for Apple to ignore the multimedia web technology. Apple’s betting that the HTML 5 standard will eventually kill Adobe Flash’s 95%+ market penetration, but in the meantime, iPhone users will have to watch their non-iPhone-having friends play around with embedded videos and interactive elements.

Mobile phones can do a lot of cool things these days. Email, internet, boarding passes, electronic wallets... the list of...