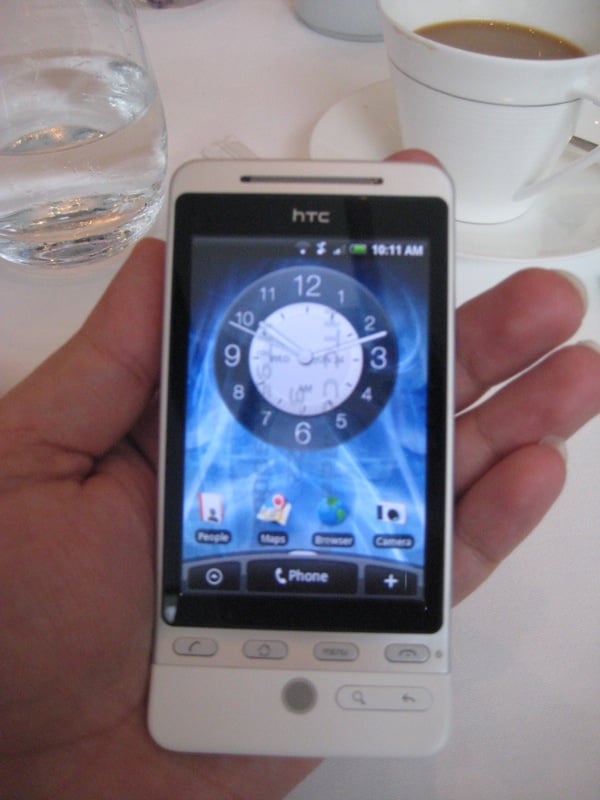 Earlier this morning, we reported on HTC’s announcement of their new HTC Hero.  We posted a bunch of pics, video, and some solid information regarding the new device.  When the news broke on the Hero, I knew that’s what this morning’s breakfast meeting, which HTC was holding with a small group of journalists, was all about.  With camera and hands at the ready, I set off the get some 1-on-1 time with their latest smartphone.

The first thing mostly everyone notices when you first see the HTC Hero is the Teflon coating of the device.  The Teflon was actually in development for a year and the reason for the coating was due to its durability and ability to be cleaned very easily.  It has a good grip and doesn’t feel like it would slip out of your hands with normal use.  The HTC Hero also feels incredibly light.  A lot of thought was put into the design of the phone as the form of the device follows its functions.  When you are using the device, the overall structure of the Hero feels comfortable in your hand, as well as during calls.

The screen, which sizes up to 3.2 inches, also has an anti-fingerprint coating which allows you to poke at the device with minimal fingerprint smudging.  If you do create a smudge, you can simply wipe the screen with your shirt to clean it with little effort.

The Sense UI running on the Hero puts a lot of focus on three particular points: complete personalization, keeping connected, and discovering the unexpected.  Personalizing the Hero is as easy as downloading new widgets which can give users a more custom feel of their own Hero over anyone else’s.  Searching for a person’s contact information across multiple venues is also possible with Sense.  This seems like a natural progression since being able to pull up a contact, seeing all of their information and being able to contact them through txt, email, or even Facebook will save people a lot of time.  The Sense UI also has a bunch of little nuances that give the user a surprise here and there to enrich their experience with the Hero.  An example of that would be when accessing the weather, if rain is forecast, a windshield wiper will clean water droplets from the screen.

All in all, it feels like a great device and will give competing manufacturers a run for their money.  No date was given for an official US launch for the HTC Hero, but we were told we should expect it to hit this Summer.