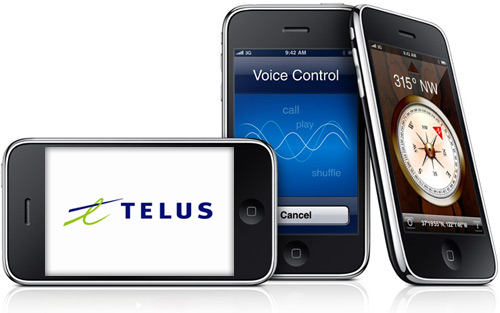 Canadian iPhone fans that are pining for the new iPhone 3GS, but are locked in over at TELUS with no desire to make a switch to Rogers (heck, who needs another monthly bill, right?)… Good news may be coming your way. A shiny-new rumor has surfaced detailing that TELUS might be getting the iPhone 3GS this October, making them the second carrier to push the iPhone in Canada. Mmmmmm, competition!

This could be a bit of a shocker to say the least, because we all thought Rogers had that whole exclusivity thing down-pat… But again, chalk this up to rumor and nothing else. The information comes to us via a reliable tipster over at HowardForums, but tipsters are often wrong.

For what it’s worth, the rumor has TELUS picking up the iPhone 3GS this October once they get their HSPA network up. At the moment, TELUS is a CDMA-only carrier.

Again, this is very much a rumor. Chalk it up as speculation at best, but it sure would be nice to see some competition against Rogers on the iPhone scene. Might help drive down those crazy monthly rates, no?

For those of you on 'Big Red' waiting oh so patiently for the Verizon BlackBerry Tour to arrive (you can...