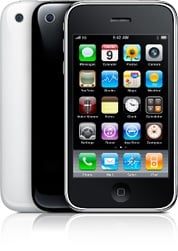 If like me (and the rest of the IntoMobile team) you were all over the iPhone 3GS launch, then you’ll know that there was some mixed reaction about whether Apple did enough with the 3GS to warrant releasing a new device…. well I’d argue yes they did.

Look at it like this – a car manufacturer releases a new model, and realises it’s successful – they then look at possible variants of the model, thinking perhaps something smaller (Nano….) and perhaps something a little more performance-based – like maybe a ‘Sport’ version. Quite often then, you’ll find the ‘Sport’ version of a car with an ‘S’ suffix – et voila – in a similar fashion, Apple do to their 3G model what their counterparts in the car industry do. Check out Audi for example – they even have a specific model (trim) line called ‘S-Line’ – which have uprated performance and internals – just like the 3GS does over the 3G model!

Really the only downsides that I can see for the ‘S’ model are that it comes in at a price premium – but even that is the same for ‘Sports’ models in the car industry. However the upsides are many – new features, new hardware, better performance – and for an incremental upgrade, I’d say it did the job well.

I suppose the only question is now, given that you bought the latest model, what is going to be released next? Will it be something that takes a ‘generation-leap’ and trumps the current model? Well, probably yes. Will it be substantially more expensive if it has uprated hardware? Bet on it. But again when you consider the R&D costs invested in a new hardware platform is it unreasonable? Only your wallet/credit card can answer that one!

I have. Having upgraded the iPhone 3G just around a week ago, I've been using the device and noticed a...