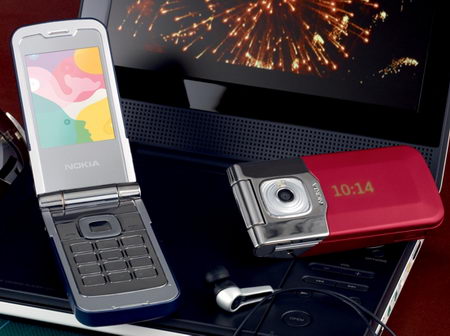 The Nokia 7510 has been sitting pretty on T-Mobile south of the border for awhile now, but here in Canada, Rogers has just picked it up. I played with one briefly at CES when it was first announced, and though it’s just a simple little flip at its core, there are a few cool features. For one, the the outer casing is interchangeable, so you fashion plates out there can have a phone that matches your wardrobe; it comes packaged with red and teal, but there’s also a brown one available for the less flamboyant users. The LED screen is cool in that it shines through that outer casing, so when it’s off, the surface just looks like a solid colour. On the more practical side of things, the Nokia 7510 offers Wi-Fi support, and as such Rogers is plugging it into their UMA TalkSpot service, so you can make calls over your local Wi-Fi connection. With the right plan, you can make unlimited Wi-Fi calls, but even without it, you’ll never have any signal issues in a connected house. You’ll be able to nab your own 7510 shortly for $49.99 on the customarily painful three-year contract.