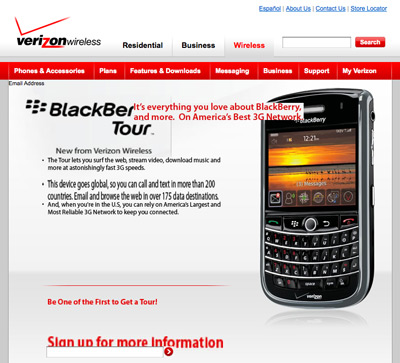 You can sign up for email updates via the BlackBerry Tour minisite at Verizon… But at the moment you’ll notice some wrinkles need to be smoothed out. You’ll notice in the screenshot above some funky image sizing and placement… I trust Verizon has a designer and/or developer on the case at the moment… It is a little late. Perhaps they were havin’ a few late night beers when they put the site up?

The QWERTY keyboard is no longer a stranger to iDEN circles. With the introduction of the Motorola Clutch i465, push-to-talk...