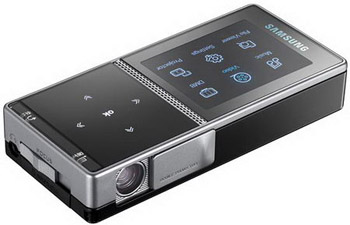 Remember Samsung’s micro-projector MBP200 we’ve seen at this year’s CES in Las Vegas? Well, it’s finally available for purchase in Europe, at least in Germany. I’m saying “finally” because it was initially slated to be released in May, but I guess something went wrong.

Anyhow, those who are looking to have a small projector with them all the time will be glad to know they can now do that. The MBP200 measures 110x49x19 millimeters and can project images at resolution of 480×320 pixels. 2.2-inch QVGA screen is also part of the device, and so is a touch-sensitive keypad, media playback software, 3.5mm headset jack, as well as a microSD memory card slot. All this could be yours for 500 EUR, which is about $700. Kinda steep, but then again, do you know someone else with a projector in his/her pocket, ha? 😉

Here's the latest rumor from the land of Canadian mobile. Word has it that Samsung lovers in the Great White...