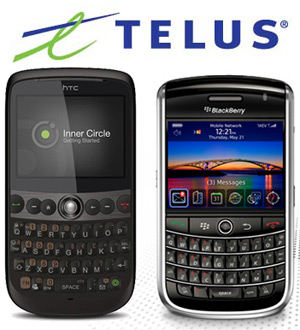 More rumored launch dates for the Canadian mobile aficionado today. BGR has reported some upcoming launch dates for some new TELUS devices. Namely, the BlackBerry Tour and HTC Snap. Both of these should launch on July 15th, with the HTC Touch Pro2 to follow that up on the 21st.

This information mostly jives with what I’ve heard and reported previously, so I’d expect these dates to be accurate. Pricing for the BlackBerry Tour will be set at $249.99, and the HTC Snap will hit us at $29.99 (on contract, of course). No details on other pricing options (other contract options, or outright purchase) but I’m sure we’ll hear more on that soon. For what it’s worth, BGR has also heard rumblings that the Touch Pro2 will go for $249.99 on-contract as well. Seems about right.

No matter which way you slice it, TELUS customers are in for a lot of HTC and BlackBerry goodness before the end of the month.

Consumer Reports' recently released their latest batch of smartphone ratings, and guess who was at the top!? You guessed it,...