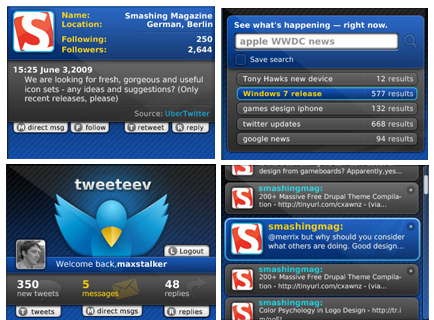 Yeah, this is what the world needs – another Twitter application. Still, you can’t complain about the looks, considering the UI looks very nicely polished, and offers all of the following, direct messaging, trends and other handy twitter functions you need while on the go. Multiple account and search support are some other advanced features you’ll find in Tweeteev, but it’s not available just yet. The screenshots here are for BlackBerry, so it might be safe to assume they’re still plugging away at the Android version. I found Twitdroid just a little unstable when testing out the Magic, so Tweeteev could be a nice alternative.

Personally, I’ll probably stick with Yatca for BlackBerry. They recently updated with geotagged photo services, and a very helpful pause/resume function so you don’t get double the alerts when using a desktop client, but still, my favourite Yatca feature is its Messages folder integration they’ve been rocking from the get-go. As for Tweeteev, if you like the look, you can sign up for notification e-mails (which should be going out next week) or take a closer look at the screenshots. I’m curious what kind of price point we’ll be looking at – it won’t be free, unfortunately, but has been described as “really affordable“… So, under $4.99? It’ll be free, apparently! Woo!

If the Feutrefon Feltphone concept I wrote about earlier was of any interest to you, this one will certainly get...