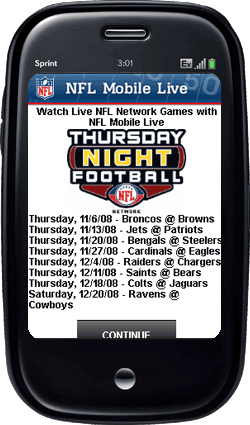 NFL fans, get ready for some live NFL action on the Palm Pre! Latest news via a Sprint support page seems to detail that NFL Mobile Live will come to the Pre on August 1st as an OTA update. Also, other rumblings have this new app coming as a part of webOS 1.1… that would make sense, as I’ve heard the NFL app could be coming pre-loaded on all new Palm Pre devices starting August 1st as well.

The details will sort themselves out shortly, one thing is for certain… NFL Mobile Live is coming to the Pre one way or another. Get ready for live audio, live video (of certain games), live NFL Network video, and a whole lot more.

If you're a developer wanting like mad to develop apps on webOS, I stumbled across a webcast you might want...