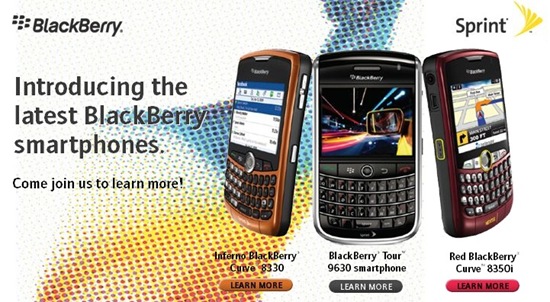 Looks like Sprint is getting ready to launch a couple of other Berry devices, in addition to the much anticipated BlackBerry Tour. A tipster sent in the above image to my buds over at CrackBerry, and… as you can clearly see, 2 new versions of the Curve series are included. The ‘Inferno’ BlackBerry Curve 8330 is painted in an orange color, and the red BlackBerry Curve 8350i is um, painted in red. Perhaps these variants will be enticing for someone looking for a solid device at a lower price point… But I can’t help but wonder who would pick one of these up instead of the Tour?

Whatever the case, get ready for the Tour to hit Sprint tomorrow… $199 on contract.

Sprint announced that it has signed a 7-year long agreement titled "Network Advantage" with Ericsson. Valued between $4.5 billion and...