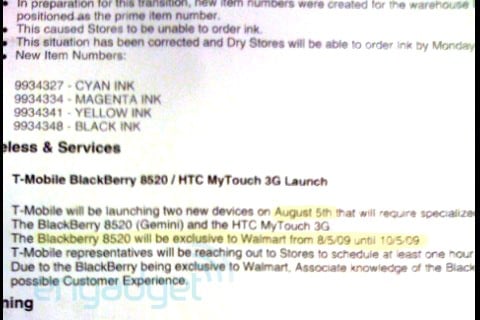 So, you’re wanting to get your hands on the upcoming BlackBerry Curve 8520 (Gemini) huh? Would it change your mind at all if I told you the only place you could get it is Walmart? Looks like that very well could be the case.

Available on August 5th, the BlackBerry 8520 will be available at Walmart locations across the US. Also worth pointing out, there is apparently an exclusivity deal on the device until October 5th. Two months of exclusivity for Walmart… If you’re not a fan, I suppose a 2 month wait isn’t TOO long of a delay. Guess we’ll see what happens here. Should be interesting to see how many actually flock to Walmart to pick one up.

Are you OK with the Walmart exclusivity? Or would you rather wait the few months and pick it up elsewhere?

Note: Also worth mentioning (I almost forgot, and you probably noticed!)… Looks like the myTouch 3G will be arriving at Walmart on the 5th as well. The 5th is going to be a big day for a lot of folks.

[Via: Engadget and CrackBerry]

Samsung has unveiled a new version of the existing device, designed for girls or for everyone who digs pink color...