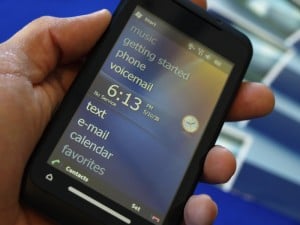 If there’s one super-model-thin mobile phone I can’t get enough of, it’s the Toshiba TG01 Windows Mobile smartphone. Measuring an impossibly thin 9.9mm thick and packed with a 1Ghz Snapdragon processor (with a second processing core dedicated to handling all communications) from Qualcomm, the Toshiba TG01 is just about the slickest Windows Mobile smartphone on market. I’ve covered the TG01 extensively over the past several months, but there’s nothing wrong with another hands-on.

Qualcomm was on hand at Mobile Beat 2009, and seeing as how Qualcomm is responsible for the processing and 3G technologies stuffed into the TG01’s crazy-thin body, it makes sense that they had the TG01 on hand for some play time. Inside, the Toshiba TG01 boasts 256MB of RAM, a 4.1-inch WVGA (800 x 480) touchscreen display, WiFi, GPS, 3.2-megapixel camera and 3G data connectivity.

If this Toshiba TG01 was infected with a virus, I certainly couldn’t tell. This particular handset didn’t sport Toshiba’s custom Windows Mobile overlay, but we won’t hold that against Toshiba. Too bad the TG01 has yet to be announced in the US.

Hey wow, LiveJournal's still around. Whodathunkit? Not only that, but they've announced that anyone blogging on their service through a...