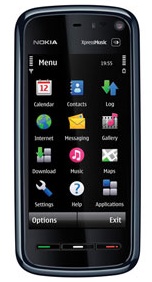 Nokia’s has apparently heard Nokia 5800 customers’ calls for kinetic flick-scrolling on the company’s first-ever touchscreen handset. The Nokia XpressMusic 5800 was actually just blessed with a firmware update from Nokia, so news of another update is a nice surprise.

A recent Nokia Malaysia meet-n-greet session had a Nokia product manager confirm that the upcoming Nokia 5800 firmware update would feature kinetic scrolling (flick your finger on the touchscreen and the list keeps scrolling), an enhanced homescreen, better camera performance and other bug fixes that should make your XM 5800 more stable and a bit speedier.

Nokia’s still in the testing process for the 5800 firmware update, so we’re not going to see the new firmware going live anytime before the end of Summer. If anything, Nokia will probably wait until the Nokia 5530 launches before releasing the new 5800 firmware. The wait should be well worth it.

Following the launch of the BlackBerry Tour, Verizon Wireless has dropped the price of their BlackBerry Storm touchscreen smartphone to...